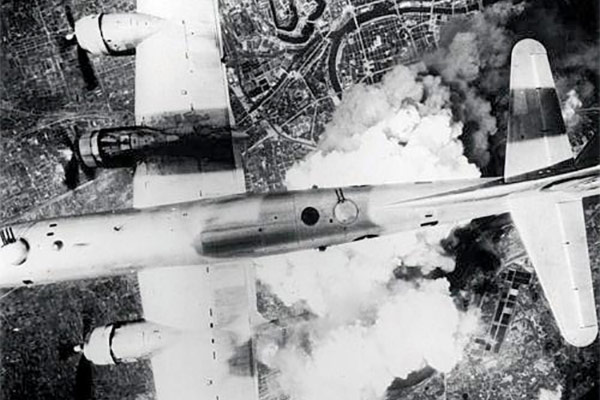 Anniversary of the Tokyo Firebombings 1945

March 10 marked the 70th anniversary of the firebombing of Tokyo by the American air force. This event resulted in horrific loss of life; somewhat over 100,000 people lost their lives to fire during the three hour air raid. This loss of life far outnumbers that suffered by Dresden in Germany, like Tokyo a city with many wooden buildings.
Mass indiscriminate bombings of cities were first practiced by the Japanese in China in August, 1937 at Nanjing and Shanghai. This was later replicated by the British in their infamous carpet bombing of German cities, including Dresden.

The sheer scale of the casualties in Tokyo, mostly women, children and the elderly, as the men were abroad fighting, is unprecedented. The target area was the shitamachi (downtown) area east of the Imperial Palace. Some 750,000 people lived there in cramped wooden quarters. The poorly manned and trained firefighters never had a chance against such a concentrated air raid.

B-29s “superfortress” bombers flew in at low altitude to a target that had already been marked by pathfinder planes. Each bomber carried seven tons of bombs. They dropped nearly a million M-29 incendiary cylinders onto the densely packed homes. These contained a form of napalm that shot out 100 foot flames. The 1,800 degree inferno unleased created winds so great that victims were sucked into the flames or were boiled alive in canals where they had sought refuge.

Even those who made in to the river could not escape, as there were intense flames on both banks of the river, and the napalm that had fallen on the surface of the river caught fire. “In the black Sumida River, countless bodies were floating, clothed bodies, naked bodies, all black as charcoal. It was unreal,” recorded one doctor at the scene.

By the time the last bombers flew over the target area and opened their bomb doors, they saw an inferno below. The stench of burning flesh was so great that some aircrew involuntarily threw up.

Almost 16 square miles in and around the Japanese capital were incinerated. Thus the Japanese capital was destroyed by fire for the second time in twenty years. This is widely considered to be the most devastating air raid in history. The burning of the capital resulted in more immediate deaths than from either of the atomic bombings, yet few outside Japan know about it.