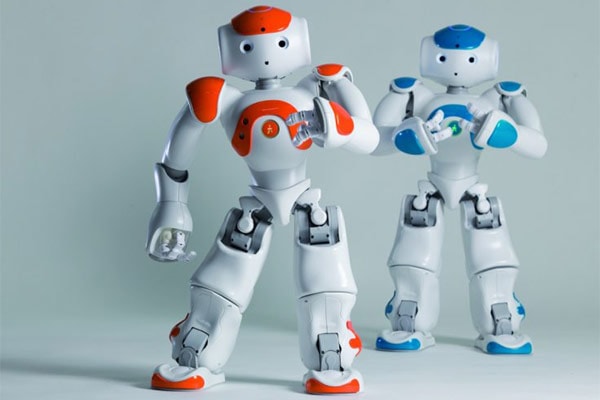 Japan has one of the most advanced robotics industries in the world and had done for decades. As Japan has a rapidly aging population bad shortage of skilled workers within the country, robots are often used in factories. In the early 1980s I used to teach English at Fanuc, a manufacturer of industrial robots. Even at that time, Fanuc was using its yellow robots to build other yellow robots.
Besides in industry, robots are increasingly being used to engage with the population. Unlike in other countries where some see robots as a threat to human employment (a valid concern), in Japan robots are seen as cute and friendly – indeed they are deliberately being manufactured that way.

This year ‘Nao’, a female-like robot, will begin work on a trial basis at two bank branches of Mitsubishi UFG Financial Group. This is a robot that will be able to speak 19 languages and to analyses customer facial expressions and tone of voice.

Nestle Japan has plans to use ‘Pepper’, another robot, to sell its coffee machines at 1,000 outlets.

At the Henn na Hotel in Nagasaki almost the entire staff will be robots. They will greet guests, carry their luggage and clean rooms. (Henna means strange in Japanese by the way)

And finally, in Tokyo, a couple was recently married by a small robot called I-Fairy, a 4ft seated robot with flashing eyes and plastic pigtails! Both bride and groom work in robotics industries.